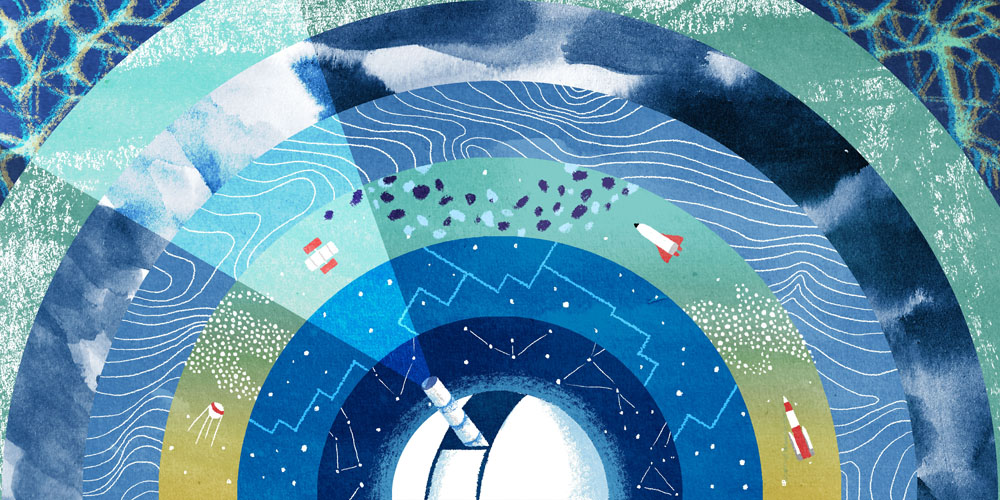 This illustration was created in response to the article Creating an Atlas of our Universe by Lisa Drummond which appeared in the Australian science magazine Lateral in June 2018. The article charts humanity’s efforts to understand and map our place in the universe. In the earliest times when the only instrument available to us was the naked eye, we observed the stars and grouped them into constellations, often inspired by myths and legends, and used the stars as a method of charting the years and seasons. With the advent of technology, more and more secrets of the universe are being revealed as we can see both further away, and further back in time, than ever before.

The far reaches of our universe are described in terms such as waves, clouds, strands and laments, represented here by different textures receding into the distance, with the colours inspired by neon-bright false-colour scientific graphs and diagrams.

Catherine Pape is an artist and illustrator based in Leeds, UK. With a 1st class degree in BA(Hons) Illustration from the University of Creative Arts, she has a particular interest in editorial illustration and for presenting information and stories in an engaging and beautiful way, with an eye for celebrating the mundane. More of her work can be viewed at:

Image exhibits > The price of the age, Jason O’Hara